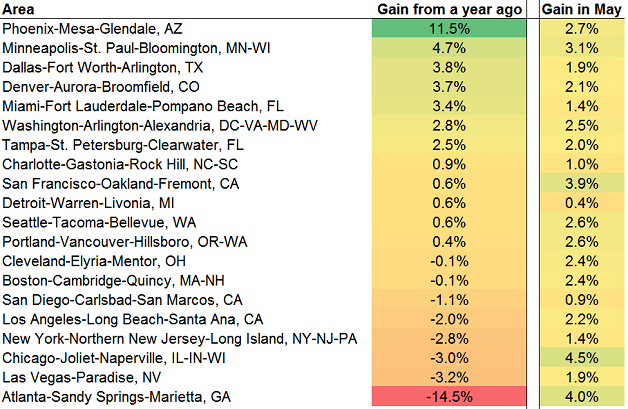 The largest gainers for the month of May included:

On the slower end, the areas experiencing the least increase in home price appreciation included:

On a year over year basis, the areas up the most include:

Eight of the areas are still below water on a year over year basis: 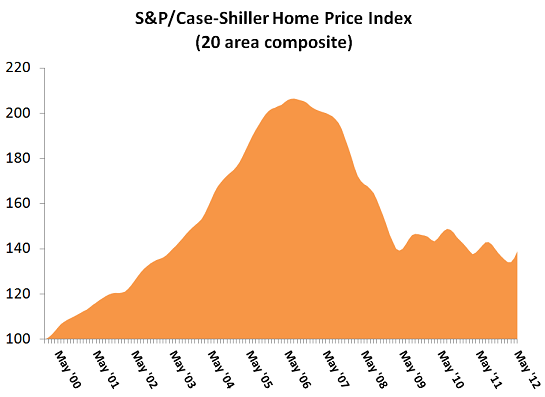 With this overall good news on the housing front, one has to wonder how strong and for how long the housing market can continue to be a support to the overall economy.  In other words, is this month’s housing price index number a sign of prolonged strength, or is the housing market still weak and therefore subject to the fault lines of the economy?  It’s a tough question when one looks at the history of the S&P/Case-Shiller Index, where the upticks of 2012 appear to be more noise in a downward trend.  Although this view may end up being correct, it appears most professional forecasters generally consider the housing market to have bottomed out.  Of course, that doesn’t mean we’ll see the gains of the 2000’s, but single digit gains in an asset class that has declined on average 35 percent over the past few years is nothing to complain about.

Is an Allowance Spoiling Your Kids?

The allowance debate is a hot topic in the parenting world, but more important than whether or not you give...