You are here: Learning Center » Mortgage Market Acumen » Improving Debt to Income: the Cases of California and Texas

In the mid-2000s we saw what some might call the golden age of housing. In some places, such as coastline states like California or Florida, home prices appreciated as much as 30% in one year. In other areas of the nation, such as Texas and other natural resource rich states, home prices did not experience the steep run-up like California, but instead experienced steady home price appreciation with little home price depreciation when the housing market dropped.

The expected profits from home price appreciation drove many individuals into taking on more debt than they probably could have handled. The increase in debt drove the housing market further upward, until, of course, economic reality set in.

Since the end of the golden age for housing, housing prices have dropped by as much as 50% in some areas of the country. Coinciding with the decline in home prices, households’ debt to income ratios have been declining for about three years now, going from a high of 109% in the first quarter of 2009 to a recent low of 93.2% in the first quarter of 2012. This ratio is calculated as total mortgage and credit card debt (Federal Reserve data) divided by total personal income (BEA data).

With this background in mind, what does the near term future look like for the debt to income ratio and the overall residential housing market? 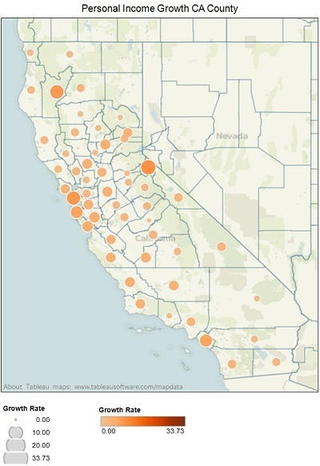 The first question – households’ debt to income ratios – has two parts: first, whether individuals will take on more debt and second, whether personal income will continue to grow.  On the denominator portion, personal incomes look to be picking up in most counties across the country, with states like California and Texas providing showing signs of sustaining economic growth.  This is shown in the circle graphs where the larger or darker the circle, the greater the growth rate in personal income. 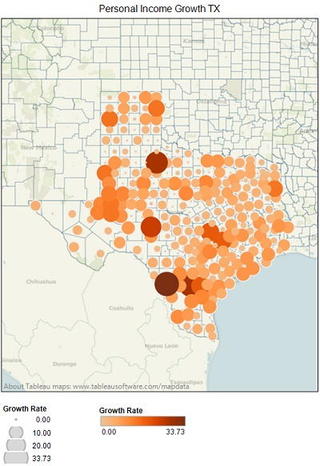 So, with personal income growing, unless debt continues to grow, households’ balance sheets will improve, i.e. their debt-to-income ratio will decline. This is happening, although the rate of decline is slowing, indicating that individuals are again gaining some of their appetite for debt “assets”, such as home mortgages.

What does the decelerating decline in households’ debt to income ratios mean for home prices? It likely means that individuals have greater confidence in the value of buying a home, a necessary but not sufficient condition for prolonged home prices appreciation.

Overall, with continued growth in personal income and a household sector that is warming up to the idea of home ownership again, home prices are likely to see continued strength in the near future.

What Does It Mean To Be Wealthy? (Part 3)

This final part of our three-part series examines what modern Americans can learn about personal finance from survivors of the...